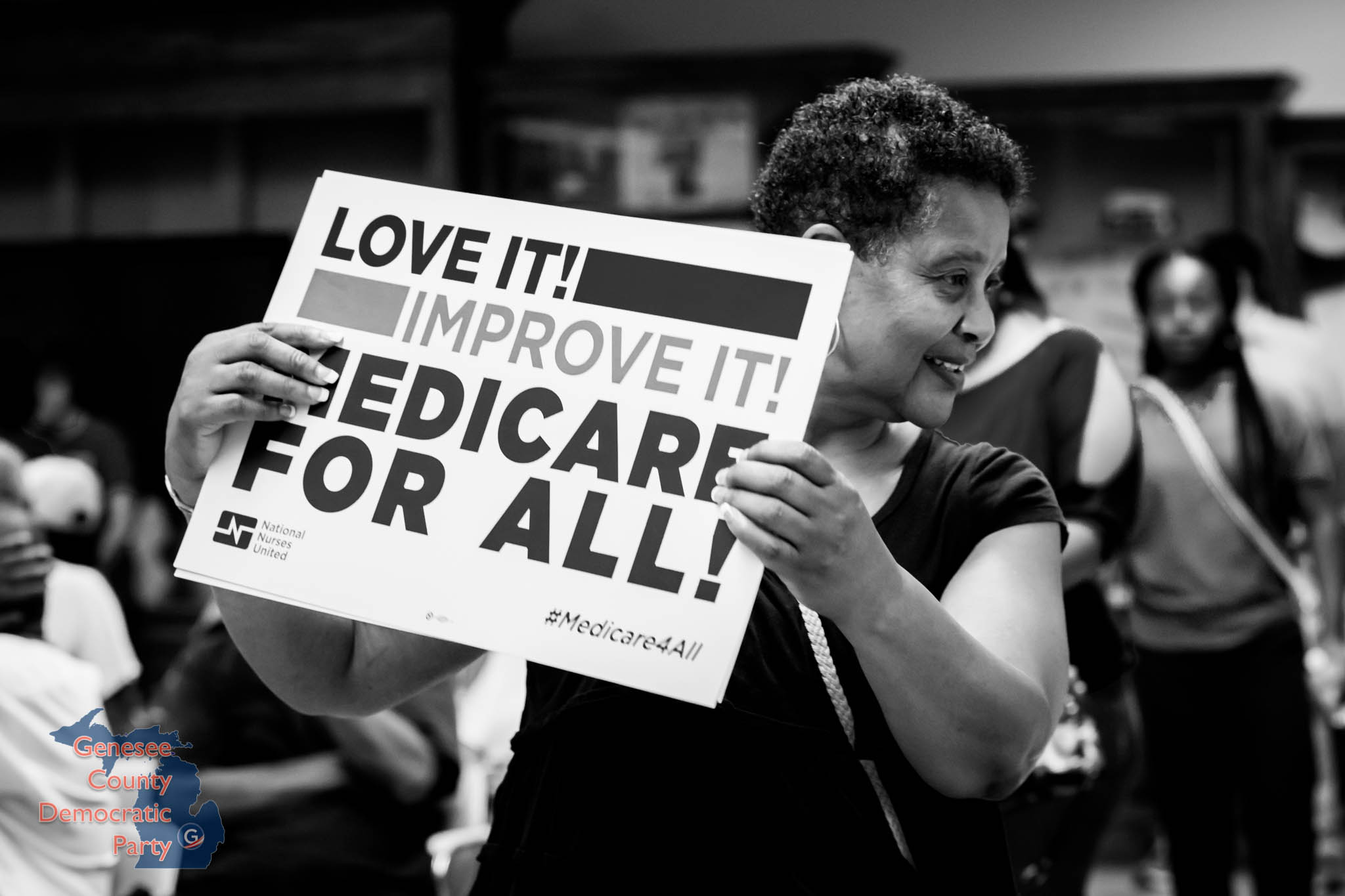 Guest blogger, Pegge Adams, is a former Genesee County Commissioner and a graduate of Central Michigan University (BS, MA) with most of her pre-retirement years spent in various areas of education. She is a lifelong resident of Genesee County as well as a card-carrying Democrat and Precinct Delegate for over a decade.

I began to type “the case for single payer”, but I think we’re beyond that at that point.  Why reinvent the wheel and cause needless confusion when we already have a proven, effective plan for delivery of health care? That answer is obvious, but not everyone sees the need for a comprehensive, Medicare for all approach. Nonetheless, that is what is needed.

After all the agonizing and making statements about previous proposals to repeal and replace ACA, we now have the “zombie” bill that is every bit as bad, inching its way to a vote in the Senate while everyone else is preoccupied with prevailing disasters. Senators supporting it include some of those Republicans that spoke out against previous measures (after a few town hall incentives), because this one takes expanded Medicaid dollars from those states that implemented that program, and gives them to those “red” states that did not. It’s a pretty clear red state/blue state maneuver to take the worry out of impending campaigns for these folks. Michigan is a more complicated picture, with two blue Senators and a red administration and Legislature. So taking it away will not just hurt a lot of people in our state, it will also sit on the Republicans here. In addition to playing games with expanded Medicare, the Grahm/Cassidy bill contains “the single largest cut to Veteran’s healthcare in our nation’s history”, according to VoteVets.  Our Senators have proven over and over again they will stand up to prevent ACA repeal. But it’s been painfully close. Republicans in this state may have the uncomfortable task of reaching out to McConnell to stop the train. Hopefully, the Senate still won’t be able to scrounge up the votes, but the fact that McConnell has told OMB to move the Children’s Health Fund to the back of the line tells me that political extortion may be on the table.

Regardless of that, there is still a lot of disagreement among Dems about how to move forward. The tasks are fixing ACA one problem at a time and expanding Medicare to include people in their 50’s because their age makes them a higher health care cost (so, first to be fired, last to be hired, and most likely to have pre-existing conditions). These measures may help but won’t solve the problem.  And while the advantage is moving slowly to improve public acceptance, the down side could be offering more ammo, for those opposed, to divide populations, particularly by age. Those under 55 would find their checks shrinking and still not have insurance for themselves. It will certainly help people who really need it, but there still wouldn’t be enough of them to pay for program. It could falter like a chair with three legs. One strength of the plan proposed by Senator Sanders is that it is phased in, beginning with public option, so that any age could get coverage at a cost far less than private insurance immediately, while building public acceptance.

By now, most people are aware that private insurance costs are very high and do not necessarily result in good coverage. Many documentaries and news stories have demonstrated the human costs, the suffering caused by this.  The premise for Michael Moore’s Sicko was exactly that: you can pay a lot for insurance and still not be covered well enough to avoid bankruptcy if major illness hits. That’s before you even begin to calculate the situations when there is no coverage at all. While ACA has helped alleviate that problem, the damage of the profit-based system remains.

Because the profit-based system seems to be a business model and also because the ACA system creates some extra costs for businesses, some businesses have clamored for repeal/replace.  Many, however, are coming to realize the benefit a single payer system could offer them. Health care costs can cripple a small business, but the health care needs remain.  When you take that burden away, small businesses can more readily expand, hire, and be more profitable while taking care of their workforce’s health, as well as their own families. In the video Fix It, one of the interviews is with a Canadian businessman, who describes himself as a Conservative and wonders why his fellow conservatives in the States don’t support government run single payer. He’s found it to be extremely beneficial in lowering his costs. Increasingly, businesses are beginning to see that undue support for private insurance is not supporting their own bottom line. They’re also starting to see other possibilities for cutting complexity, paperwork, and contention while getting the health care job done. One suggestion was to bring Workman’s Comp under that umbrella. The cumbersome and contentious process could be replaced by just making sure the person’s medical needs were promptly addressed.

Which brings us to the horrendous costs of private insurance based system. It bears repeating that healthcare in the U.S. is nearly twice that of Canada, and medical bills are the cause of 62% of all U.S. household bankruptcies. Of those, 75% have insurance. Our healthcare costs are growing at a faster rate than the GDP, so far from worrying about whether the cost of universal healthcare will bankrupt the nation, we need to realize the opposite is true. If you compare the percentages of health care cost to GDP, the U.S. pays over 6% more compared to developed countries such as France, Germany or Canada whose figures are all around 11%. It’s not hard to see why. Profits for some equal disasters for others. Even a small doctor’s office has to spend money on several people to do nothing but wrangle with private insurance companies. Administrative costs are around 30-35%. Drug costs are uncontrolled. And then there’s profit. While ACA has held that down to 20%, the “zombie” currently on the Senate table would take the lid off that.

In contrast, Medicare claims are quick and generally without difficulty. The guidelines are clear and the system is efficient. This is true, to an even larger scale, in hospitals, and that principal applies to other types of healthcare providers as well.  If we establish universal health care through expanded Medicare, we save over $200 billion in administrative costs and professional services alone (establishing a unified fee schedule). If you were to consolidate Worker’s Comp as well, the savings would escalate even more.

Beyond money, the saving of lives and health, time, and the spirit of healing is beyond measure. What is the cost when lives are lost? Do we know what that person might have contributed to us all if they had lived? I’ve known individuals all along the economic continuum, and wealth is not an indicator of intrinsic worth. And for those that limp along in chronic pain, what impact does that have on job and family? For those with untreated mental health and addiction issues, criminal activity may become part of the picture, and further damage is done to their families and communities.  On the delivery system side, doctors are trammeled with paperwork and the fifteen-minutes piece of time allotted for each patient to the point it takes the joy out of the job. Even those highly dedicated to healing find themselves questioning why they pursued medicine.  Some of those that remain are calling, with conviction, for single payer. In an article in the Washington Post, on September 13, Dr. David Ansell concludes that the inequality in our healthcare system results in many deaths, based on his personal observations during his a forty-year practice in Chicago. He’s pretty tired of it, and he’s not the only one. But he further states that, while he feels an obligation to treat patients without regard for insurance or ability to pay, that’s not the case with all: “America’s fragmented, for-profit health system forces doctors to violate their Hippocratic oath, the moral contract requiring us to treat health as a basic right…” Clinics and hospitals in underserved areas teeter on the brink of oblivion because of uncertain funding, and the choices they face are the same, on a larger scale.  Without ACA, they will fold. With universal healthcare, they will thrive. Hospitals spin patients out after surgeries in record time, but those decisions are guided more by insurance guidelines than medical wisdom. Again, with universal healthcare, those decisions can be made according to a prudent course of treatment rather than reimbursement issues.

This spills into research and public health as well. When research is profit driven, the pursuit of cures is constricted to those with market value. That leaves us helpless when new diseases emerge or old ones return. Increasing antibiotic resistance could lead to deaths across economic lines, but little research is being done to find new antibiotics or other methods of treatment. There is not a lot of money in it. But at some point, anyone’s life could be threatened by ignoring this problem.  A universal healthcare system rightly puts the value on human life and quality of life, and that would change the priorities of pharmaceutical and research labs for the better.

Only with a complete, single payer healthcare approach can we eliminate competing bureaucracies and unnecessary administrative costs. It solves the access problem, because now care would be available in every corner of the country, because the funds would be there to support it, regardless of the vagaries of insurance company profits.  It stops discriminatory health care and the resulting physical, mental, and community damage that can cause. It stops the economic ruin to individuals, small businesses, and government caused by the crazy private health care system, and it results instead in health and increased prosperity. It stops our decline as a nation in healthcare outcomes, supporting a system of truly needed research, rather than market-driven research, and offering better protection from emerging health threats. But most of all, it delivers on the promise hoped for by the framers of our Constitution, as they looked forward to a more perfect Union, particularly to “establish Justice” “promote the general Welfare” and “secure the blessings of Liberty” to us, their posterity.