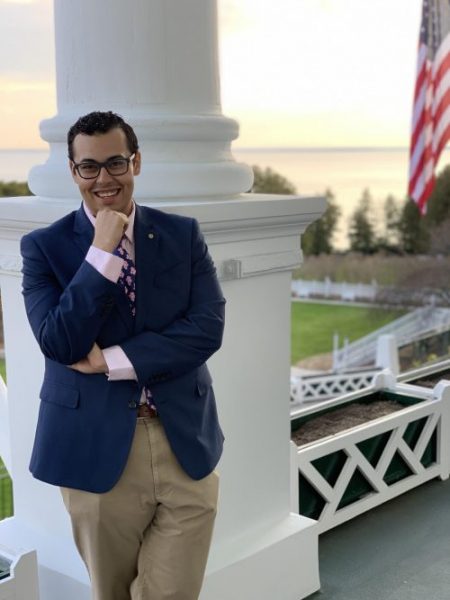 Domonique Clemons currently serves as Legislative Director for State Representative Alex Garza (D-Taylor). In this role he leads policy initiatives for the representative and manages his legislative office. Domonique has several years of government, political, and advocacy experience. He volunteered on his first campaign at the age of 15 and has since worked, volunteered, consulted, or served in some capacity on over 40 political campaigns in Michigan ranging from local officials and ballot initiatives, to statewide candidates and congressional races. Domonique has previously served in roles such as Strategy Assistant for the Michigan College Access Network, Regional Organizing Director for the Hillary Clinton Campaign and Michigan Democratic party,  as well as Communications Specialist in the Michigan Senate.

Born and raised in Flint Michigan, Domonique Clemons attended Flint Southwestern High School and holds a Public Policy Degree from Michigan State University, as well as a master’s degree in Political Management from the George Washington University in Washington DC.  While at MSU, Domonique served as Student Body President, working as an advocate and change agent for mental health resources on campus, college affordability, improved handling of campus sexual assaults, increased visibility of the council for racial and ethnic students group, as well as a better understanding of diversity issues on campus.

As the world economy continues its rapid globalization and expansion, it is more vital than ever that we maintain our higher education system’s integrity and intrinsic social value. While no one can deny the fact that the United States is home to a superior post-secondary education, there are serious flaws that plague each and every student attending our universities and colleges. Student loan debt, inflating tuition, and college accessibility are among the most prominent issues discussed in the halls of Congress and state legislatures, but a far more concerning problem needs urgent attention: sexual assault on college campuses.

A 2007 Department of Justice report, entitled the Campus Sexual Assault Study (CSA), found that one out of every five women experience a completed or attempted sexual assault during their time on campus. Every one of us knows at least five women, which is what makes this fact so truly disturbing. We need to do more in governance, at universities, and within our society.

If you are in any way affiliated with Michigan State University, you probably know about the decision handed down by the Department of Education’s Office for Civil Rights, regarding sexual assault, harassment, and relationship violence at MSU. It would be surprising for an MSU student to not be aware of the current situation, and even more surprising would be an individual that is aware yet not concerned or frustrated with how our generation has dealt with this reality. We are not having the necessary conversations on our campuses and too many students do not treat this matter with the importance that is appropriate given a problem this large.

It would be wrong to say that government leaders and university administrators have not attempted to solve this problem. Even given the disheartening findings of OCR’s investigations at MSU, there are countless individuals on campus that are truly well-intentioned and passionate about ending sexual assault. However, cultural change is almost impossible to happen through simple university policy changes, Title IX compliance, or brief Sexual Assault and Relationship Violence (SARV) workshops. It is very clear that this issue has gotten so far out of hand that we have been forced into reactionary measures and discipline rather than attempting to eliminate the problem all together.

Fortunately, state senator, Curtis Hertel Jr. has taken a huge step in the right direction by introducing legislation directed at teaching affirmative consent. Instead of trying to push change onto university campuses, the bill would mandate the teaching of affirmative consent in any secondary school that offers sex education. Affirmative consent is a very simple concept to understand: if you do not get a yes, it is rape. It is really just that simple. By teaching high school students exactly what to expect if they choose to attend post-secondary schooling at a university or college, we will be able to start the conversation early and hopefully instill a sense of community around the idea that sexual assault is an incredibly serious matter and consent is the most important part of any sexual encounter. This piece of legislation makes me proud to have worked with Senator Hertel on this important topic while I was student body President at MSU in 2015, but more importantly; it is a common sense bill that should not find itself entrenched in the partisan gridlock that we often see in government. There is absolutely no reason for any of our legislators to oppose this bill and as an organization the MSU Student Government (ASMSU) has been dedicated to providing the insight and advocacy that will push this bill on to the Governor’s desk.

Generally, cultural change has proven to be a very slow moving process that often requires an entire generational shift, but when it comes to sexual assault we cannot afford to waste time with inaction. Not only is this a stain on our society, it is also a public health matter of the utmost importance. No parent should have to send their child to a campus where sexual assault is a common occurrence. Senator Hertel has done our state, universities, and nation, a great service by opening the door for substantive change and providing a large step in the right direction. It is unacceptable to stand by and allow lives to be ruined by a fleeting moment that is all too preventable. It’s on us, all of us, to end sexual assault and restore the safe environment students should be able to expect during the most trans-formative years of our lives.