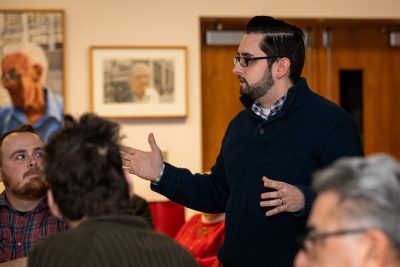 Keith Flynn is the Chair of the Genesee County Democratic Party and a labor and employment attorney with Miller Cohen PLC representing workers in the public and private sectors.

Elections matter and have consequences.  In 2016, Donald Trump became the 45th President of the United States due partially to incredibly low turnout and voters who crossed party lines to vote for Trump.  So what were President Trump and his Republican Party able to accomplish two years later? Their chief accomplishments were the appointment of conservative and reactionary judges and a massive tax cut for the incredibly wealthy and corporations.

This tax year, the Republican “Tax Cuts and Jobs Act,” comes into effect.  The top 5% earners have a lot to look forward.  The corporate tax rate is being slashed from 35% to 21%. Owners of pass-through companies that do not pay corporate taxes will likely save billions in 2018 alone in their personal taxes. Those who make over $500,000 a year will likely save more than $32,000 a year in taxes.  Wealthy Americans can also look forward to avoiding estate tax with the exemption being increased, at a minimum, from over $5.4 million to over $11 million for singles and from $11.2 million to over $22 million for married couples.

On the other hand, the average tax return is down by 17% this year.  Republicans have targeted numerous deductions that are used by working and middle-class Americans, including itemized deductions for state and local taxes and for miscellaneous expenses for job expenses like the following:

Prior to the Tax Cuts and Jobs Act, workers could deduct unreimbursed job expenses in excess of 2% of their gross income. In 2014 alone, $90 billion was deducted by Americans from their taxable income for these job-related expenses.

Now, no longer as those deductions have been eliminated for tax years 2018 to 2026.  Of course, many corporate business expenses are not taxed, such as membership dues to the Chamber of Commerce or legal fees for union-busting.

While Republicans argue that itemized deductions like the miscellaneous deduction are not needed now that the standard deduction has been doubled, many union families have a lot of expenses such as mortgage interest that still makes itemized deductions the better option.  For those workers, they could see a tax increase or, at minimum, a larger share of the total national tax burden than in the past. The wealthy will likely see their share of tax burden decrease. For instance, those who make between $40k and $50k will only receive, on average, a $570 tax cut versus those who make more than $1 million who will receive an almost $70,000 cut.

Democrats have introduced a bill in the Senate to not only reinstate these deductions, but to make union dues an above-the-line deduction allowing more taxpayers to benefit from the deduction who do not itemize their return.  What is the chance that this bill will be passed? Next to nil as the Senate is controlled by Republicans. Even if the bill was passed, President Trump would have to agree to sign the bill into law, which is unlikely to happen.

Once again, elections matter and have consequences.  Vote your pocket book. Get active, get involved with your local Democratic Party, and let your voice be heard.  The Genesee County Democratic Party meets the second Thursday of the month at 6pm at UAW Region 1D, 1940 W. Atherton Rd., Flint, MI 48507.  Our next meeting is April 11th. Come join us!

This article was written to convey a political opinion.  It does not constitute legal or tax advice and you should be sure to consult your own legal/tax advisors.