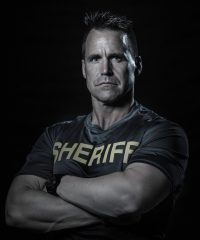 Chris Swanson is a career law enforcement professional spanning over 25 years.  His current rank of Undersheriff for the Office of Sheriff in Genesee County has allowed him to witness some of the most difficult situations one can imagine.  Chris is a two time author, with his first book becoming a best seller.  Founder of Swanson Leadership, national speaker, content producer and a four time IRONMAN finisher.

The sky was grey and frigid air filled their lungs. Unarmed men took shifts securing the fortified
entrances, exits and windows. Visions of burned human remains, starvation, sleep deprivation
and years of slavery were the driving force of this band of mercenaries. They stood their
ground. They had no choice. Freedom was their only option.
On the morning of December 30, 1936 they came together as strangers. But over the next 44
days they proved their commitment to each other putting everything on the line including their
life.

Outside stood the opposition, accompanied by an armed infantry. Ready to kill if ordered.
Make no mistake, this conflict was not on foreign soil or on the beaches of our allies. This was
Flint, Michigan. Those that ignited the fire of change were not battled tested or trained. They
were electricians, welders and assemblers. These men took action against a unique enemy, the
white collar owners and management. The ones who historically devalued human life and
subscribed to the philosophy of indentured servant hood.

Before this day of rebellion when a worker was killed from unsafe procedures or unbearable
work conditions they were disposed of like property and a new one ordered.

What country was this? It was the United States of America. The same country who for 160
years celebrated its own freedom from tyranny and opposition. Yet it was still happening at
production plants across the country.

We have a duty to fight for those that can’t fight for themselves. To rise up when human rights
are attacked. On February 11, 1937 their call to action was answered.

Through the valiant efforts of the brave men of the Flint Sit Down Strike and their families the
United Auto Workers (UAW) was finally recognized as the sole bargaining agent for the workers
of the largest company in the country, General Motors.

Since then millions of hard working Americans have prospered and the promise of dignity has
been embedded into labor contracts to this day.

As a proud dues paying union member for 26 years, when I’m asked of my loyalty to union
labor, I sound off! I will not forget what those before me did to give me what I have today.

And neither should you!